Leading the Way with Independence Days!

The term “Fourth of July” is the popular name for the U.S. federal holiday officially known as Independence Day. It isn’t surprising that we would come up with a different name from the official one, since “Independence Day” is one of the most common holiday names across the globe. Most of the nations in existence today won their independence from another power, whether through wars, treaties, or long transitions.

What might surprise many people is how old U.S. Independence Day actually is compared to the similar holidays of other nations. Although the U.S. is still considered a young nation, it was one of the first to make a full break for its colonial master with a new constitution. Most countries that celebrate a national Independence Day are commemorating events that occurred in the second half of the 20th century, when many older empires at last relinquished control over their colonies.

How substantial is the difference in time for the U.S.A. and the rest of the world? U.S. Independence Day celebrates the signing of the Declaration of Independence from the Kingdom of Great Britain in 1776, making our country unusual in that almost no existing nations celebrate an independence event from the eighteenth century.

In terms of age, there is only a tiny handful current countries that celebrate an independence day that occurred earlier than the United States. Switzerland celebrates its independence from the Holy Roman Empire of the Germans in 1291 with “Swiss National Day,” held every August 1—although this only gained status as a national holiday in 1994. Sweden Celebrates “National Day of Sweden” to commemorate events in 1523 and the election of King Gustav I during the War of Liberation against Christian II of Denmark and Norway. Romania comes almost a hundred years after U.S. Independence, with its 1877 freedom from Turkish rule.

Does anyone else celebrate a literal “Fourth of July,” an Independence Day that also falls on the fourth day of the seventh month? Yes: Abkhazia, a small Central Asian country that declared its independence from the Republic of Georgia in 1999 (although not all countries recognize it). Coming a day (like South Sudan) on July 5 is the independence of the small Atlantic island nation of Cape Verde, which became free from Portugal through signed agreement in 1975.

Everyone at Fort Collins Heating & Air Conditioning hopes you and your family enjoy a vibrant Independence Day/Fourth of July this year! 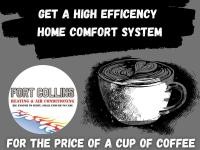